ASPIRATION: Battle of the Bands

ASPIRATION: Battle of the Bands 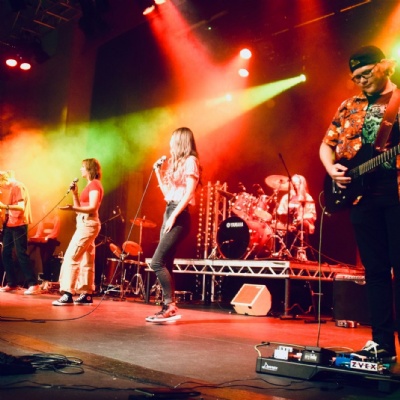 On Friday 1 July, bands from schools across the Trust travelled to Bridlington Spa with their musical equipment in tow to compete in the East Riding Schools’ Music Service Battle of the Bands 2022.

Battle of the Bands provides contemporary musicians with the opportunity to compete at the highest level on the famous stage at Bridlington Spa. This year, twelve bands competed, each representing their school and community.

They all had the opportunity to practise alongside professional sound engineers in a pre-show soundcheck, before taking the stage to compete against other school bands from across the county.

The Soleros said that it was “nerve wracking but amazing” to perform in front of the expert judges and sold-out crowd. Amy from 11:37 said her favourite part of the day was “the sound check in the afternoon, standing on the stage for the first time and hearing our performance in such a big venue was completely different to our small practice room in school and gave us an extra boost of confidence.”

All the bands performed with charisma and talent, but it was “The High Ground” from Holderness who won the trophy with renditions of Pretender by the Foo Fighters and Come Together by The Beatles, both of which they put a heavier spin on.

They received glowing remarks from the expert local judges, who commented that the performance was polished and impressive, their vocals were great, the musicians were fabulous and overall, “they owned it!” The High Ground said that winning felt like a “lifetime accomplishment to see our hard work pay off, we are living the dream.”

The High Ground were interviewed on BBC Radio Humberside alongside Mr McDonald and Mrs O'Malley, you can listen to the full interview HERE (Timestamp 2:45:29).